The Health & Safety Executive's recent introduction of a Fee for Intervention is a clear statement of intent in a country where, in reality, most organisations, especially those who have not experienced an accident or major breach, are likely to be failing to meet either regulation or health and safety best practice. With new H&S demands constantly evolving - such as ensuring the health and safety of lone workers - organisations now face significant costs (estimated at £100 per hour, up to £8,000 for a major breach) should an HSE investigation occur.

But safeguarding lone workers is not only relatively simple - it can transform business productivity and effectiveness.

The first requirement any business must consider is the dangers facing a lone worker and the potential communication limitations based on location and the risks associated with a job or activity. Organisations cannot simply provide a mobile phone and consider the lone worker health & safety obligations are covered. In fact many businesses do not allow for the use of standard mobile phones, for example, in explosive atmospheres where a mobile phone would potentially cause a problem rather than provide protection.

Businesses should also assess the day to day activities of lone workers and whether improving communications could deliver productivity improvements. By implementing a lone worker system a company not only meets its health and safety obligations but can also improve the timeliness of repair, minimise the administrative process typically involved in locating and allocating an engineering resource, and increase machine uptime.

A world leading premium drinks business has long had a focus on lone worker safety. Over the last fifteen years, the organisation has rolled out an 'intrinsically safe' lone worker communications solution from ANT Telecom that not only has addressed the safety needs of its lone workers but also increased internal business communication and productivity in 18 sites across the UK.

Over the last 15 years, the drinks industry and business processes have evolved to the extent that employees today may be working alone for significant amounts of time, up to four to five hours, therefore prompting a need to implement lone worker communication systems as a way of ensuring employee safety.

Previously, one of the world's leading premium drinks businesses operated a 'Safe System at Work' procedure, whereby employees on different sites would rely on a radio handset, and each other, to communicate and provide health and safety back up. It was, however, a system that varied in its robustness.

A spokesperson for the company, explains, "Previously, a lone worker in one distillery would use a radio handset that could carry a signal across to another distillery where there would always be two operators with the use of a telephone. The Safe System at Work procedure would rely on a regular hourly call between the lone worker and the manned site."

He continues, "This was a system that was clearly flawed, not only subject to human error - but also from the perspective that there were no alarms in place. The two sites had no way of knowing, if a call was missed, whether this was due to an incident that required emergency attention for example. It also did not allow for real-time alerts if an incident did happen just after a 'Safe System' call had taken place. We had to address the lone person working risk assessment and find a mitigation measure that was fail safe."

Originally, the company implemented a fairly rudimental paging system but only implemented two sites before becoming dissatisfied with the after sales service. At that point, 15 years ago, they approached BOSCH Telecom, which latterly became ANT Telecom, who was willing to develop a bespoke solution that would meet all the business's unique requirements.

The spokesperson explains, “Prior to updating our lone worker paging systems we established a user group – comprising employees from the six distilleries that were set to implement a lone worker system – to identify the ideal functions. At the time there was no handset with the required functionality that was intrinsically safe; the technology just didn’t exist, not even offshore for the oil industry.” 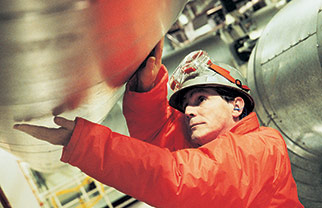 Following the identification of a gap in the market and talks to establish the company’s requirements, ANT Telecom looked into the options for the functionality required within an intrinsically safe device and offered to create a system to operate over the six distilleries.

The spokesperson comments, “I was astounded that intrinsically safe devices with lone worker functionality were not readily available. However, within two months of speaking with the ANT Telecom team we had 72 intrinsically safe handsets that met all of our requirements – mobility, tilt mechanism, automatic calling panic buttons, vibration alerts and a manageable sized handset that holds charge for at least, the minimum duration of an employee’s shift – to be used by distillery employees and awaiting certification.”

The spokesperson explains, “We had a particular issue with our Sunday night lone workers who start a shift at 10 o’clock. ANT Telecom made the system intelligent enough to identify when handsets log on, if they are not active by 10 o’clock it would raise an alarm to an offsite company who would follow up and locate the employee in question.”

“This system is particularly useful in distilleries on islands where a worker may be driving from one end of the island to the other to get to work and is the only person on site. It allows management to be notified if they do not arrive,” he adds.

The company’s initial business driver behind the implementation of the DECT lone worker system was a safety requirement for its employees. However, from this driver has developed a much greater business benefit that was not foreseen; with a more effective communication solution that has saved valuable time and increased business productivity.

The spokesperson explains, “The lone worker benefits of the system are paramount and luckily only once in the past 15 years I have been aware of it used for someone in need. However even more beneficial on a day to day basis is what the system does as a complete mobile communication tool that allows direct communication with mangers and operators; operators can also call directly to maintenance personnel and explain a situation in real-time, when looking at the equipment in question which is far more practical.”

He adds, “Across our sites workers move around, so previously it could be possible that an individual might not be locatable when needed and you would have to leave a message with a colleague. Being able to dial in on site and talk immediately with the relevant person is much more beneficial. Direct communication is the biggest benefit we have found with the DECT system.”

Whilst working with the premium drinks business over the last 15 year period, ANT Telecom has filled a gap in the market and created a bespoke DECT system with added functionality to ensure the company’s lone workers are safe and in doing so have also built a successful lasting business relationship. The spokesperson for the company concludes, “We have been working with ANT Telecom for some time now and have an excellent relationship. The system provided by ANT Telecom makes a real difference in terms of employee safety and mobile communication. It has made a fundamental difference to our business.”