UK Violence in School: Are you prepared? 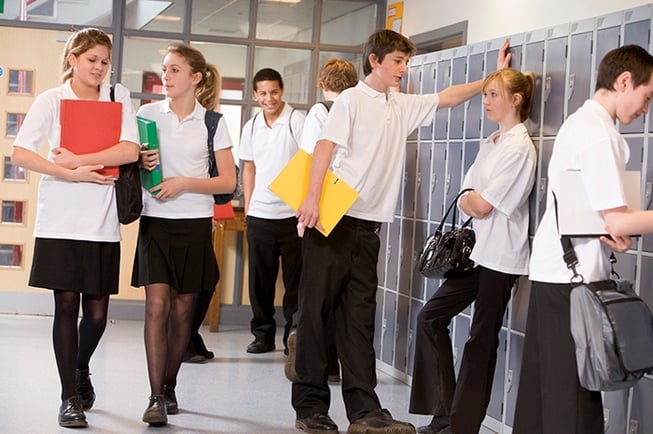 As the number of reported incidents of violence in schools increases, it is more crucial than ever that school leaders and managers assess the potential dangers to their staff. Head teachers and school business managers not only have a responsibility to identify the risks in their environment, but also to have effective arrangements in place for managing these.

School violence in the UK: How real is the issue?

In an Association of Teachers and Lecturers (ATL) survey, released in January 2016, 43% of education staff reported that they had to deal with a violent incident in the last year. Physical violence experienced by staff ranged from having furniture thrown at them, to being pushed, kicked or punched.

Wales’ largest teachers' union, the NUT, published their own findings at the start of this year. After raising freedom of information inquiries with 22 of the local authorities in Wales, they uncovered that 4,500 physical and verbal attacks had been recorded over the past three academic years; that works out at an alarming average of 8 assaults taking place in Welsh schools every day.

Of course, it isn’t just the teachers who are on the front lines of our community secondary schools and academies. A UNISON survey, published in June of last year, showed that more than half of classroom or teaching assistants across the UK had experienced physical violence at school in the past year. Equally concerning was the finding that 76% of members who took part in the survey had witnessed acts of violence. UNISON’s report also revealed that almost one-fifth (20%) of educational support staff, such as school business managers, technicians, librarians, administrative workers, caretakers, cleaners and catering staff, had experienced school violence.

Where do the risks come from?

The majority of violent acts in schools involve students. With social services and adolescent mental health services (CAMHS) being stretched to breaking point, all too often schools are left to try to support and manage students with complex needs. Some of our most vulnerable students struggle to cope in the school environment which may lead to violent outbursts in the classroom, endangering staff, students and the perpetrator.

An investigation by the BBC, conducted in 2014, surveyed 32 UK police forces about crimes reported in schools. They found that 31% of the total reported incidents were violent crimes. The highest rates were in Greater Manchester and the West Midlands; these areas are also some of the most deprived in the UK, according to figures from the Office for National Statistics.

Academies and community schools with a high proportion of students with social, emotional and behavioural difficulties often have a range of strategies in place. Frequently, this will include provision for students to be supported outside of the classroom, either in small groups or one-to-one. This can be on a regular basis, when the student has been struggling, or when the young person has been deemed too disruptive to remain in a class with his or her peers. These interventions are extremely important, but also pose a risk: due to schools being oversubscribed and space being at a premium, teaching assistants are often found hunting down a spare room; they can find themselves isolated with some of our most vulnerable students, their whereabouts unknown to other staff.

Another time when staff may be working alone is during duties, dealing with large numbers of students dotted around the site. Most schools have a locked gate policy during the school day, with restricted entry, however, this obviously cannot apply at the start and end of the day. At these times, staff are exposed to the general public and parents who may have grievances; a startling one in 20 teaching assistants have faced violence from a parent, according to a 2016 UNISON survey.

How does this impact on education?

Teachers and classroom assistants need to feel safe and empowered to be able to do their jobs effectively. With almost half of respondents in the ATL survey, published in 2016, stating that they felt pupil behavior had got worse over the past two years, it suggests that many don’t feel secure and confident in their work environment.

Furthermore, ATL reported that 'half of staff said dealing with pupils' challenging or disruptive behaviour has caused them stress and 41% said it has caused them anxiety' (in 2009, the same survey found that only 20% had experienced mental health issues). A worrying 10% had to visit the doctor as a result of these problems.

Retention of staff in schools is a huge concern for head teachers. The disruption that a change in teaching staff causes for students, along with the added workload associated with recruitment, is far from productive. With over a third of teachers considering a change of profession, and a quarter considering a change of school as a result of pupil behavior (ATL, 2016), ensuring that staff feel supported must be a priority.

Assessing and managing the risk of school violence

In a world where it is second nature to carry technology such as mobile phones, telecoms can be used as an invaluable safety aid for front line staff in schools. Devices can raise automatic alarms or have panic buttons and users can even receive calls at pre-determined intervals, helping to protect staff who are working alone or in challenging situations.

Teachers, teaching assistants and support staff need and deserve to feel safe in their work environment. In achieving this, the school will get the very best from its workforce, allowing the young people that it serves to access the best education possible.