What are the risks faced by schools regarding safety? 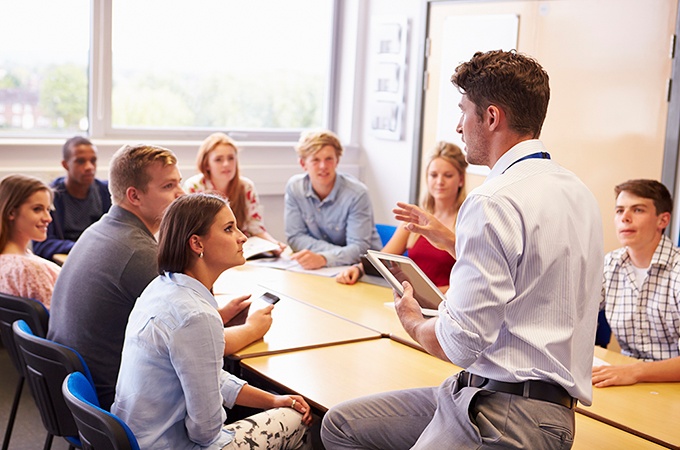 Most people, whether they live alone or not, have house alarms, and their cars have alarms and tracking devices. Yet, a teacher, who by definition is a lone worker, spending hours in an environment where the risks of facing real threats of violence is increasing by 4% each year, has little security. If there's an incident in the classroom and things become hostile, outnumbered by a class full of children, their ringleader armed with a makeshift weapon, a teacher needs help immediately.

School safety used to be focused on fire drills and telling kids not to run in the hallways; then it became obsessed with things like risk assessments and health and safety procedures and implementing strategies to fix and prevent everything. But few would have thought a major part of their safety considerations would become personal security, to fear for their own lives whilst at school. Maybe in America; not in Britain.

Most incidents happen unexpectedly, in places nobody expects them to

It was almost unheard of in UK schools not many years ago, but today, unfortunately for teachers and students, the possibility of being the victim of a violent attack, or witnessing one, has become an everyday reality. Leafy suburban schools, nice, well-loved teachers and pupils, excellent credentials appear to make no difference to being targeted. And for the attackers, their weapon of choice is limited only by what they can either buy or make; with enough information and more money than kids used to have that leaves little to the imagination.

Despite the Department of Education allowing teachers more power to help control unruly pupils, the problems are becoming more prolific. Many of today's parents attended school at a time when many powers were stripped from teachers, so it's no surprise that it's sometimes the parents who pose the biggest threat. Nobody likes hearing their child has behaved badly. If an incident requires a home visit, things can turn nasty.

Fights between students and threats from intruders can all be added to the modern landscape of education. And when it comes to trouble in the classrooms, the identity of the attackers can still cause disbelief; the methods used to cause harm, even more so.

In Scotland, proof that offenders come in all disguises, a seven-year-old girl was so violent that the authorities had to be involved three times! She attacked teachers using her teeth, nails and handmade weapons.

After a typical scenario of one girl going out with another's boyfriend, revenge was taken by sabotaging the victim's viola case with sulphuric acid. Knowing it would be pulled off a shelf to be opened, the intent was obvious and well-researched, including police punishments for carrying out such an attack. The young victim suffered multiple injuries, including psychological.

Teachers and students were all in shock after a school building was set alight at Clements Primary Academy. The attack caused no loss of life, but totally destroyed the building. Suffolk Fire Service found no obvious cause of the fire, but strong suspicions pointed to arson.

In June 2017, a pupil about to enter the grounds of High Arcal School suffered minor injuries following a vicious attack. Although it wasn't on school grounds, there's no arguing school was the approximate and chosen location to carry out an attack on a pupil.

While serious incidents at schools and the measures to prevent them are being addressed at the highest levels, and many schools implement various security measures to help detect weapons and intruders, incidents still continue to rise in numbers. Chairs and tables are effective weapons; punching, kicking, biting and scratching are all effective ways to attack someone. From the moment trouble starts, the alarm needs to be raised. But it's not always that simple, especially in the face of an attack.

What about off school grounds?

Field trips to parks and museums, visits to homes with unpredictable adults are all examples of places where there's even less support or ways to raise an alarm. Despite everything, people who work in the education sector have less protection than they've ever had. Until there are real changes in legislation, and no violence exists in the world (violence sexed-up through TV and gaming), the best defence is to equip teachers with their own type of personal alarm. It's the next best thing to a panic room. It could save their life, and it will definitely make them feel better.

To have security guards in classrooms, and patrolling every hallway and pathway isn't feasible, and doesn't instil confidence. It shouldn't have to be like that. There are more subtle ways to improve teacher safety and cut down incident response times. Many can be integrated into smartphones within minutes and with the use of cloud based infrastructure, alarms can be distributed to colleagues to make them aware of any emergency within seconds.

The UrSOSButton is a small, lightweight device, which, when pressed, discretely activates an app on the teacher’s smartphone that sends an alarm message to colleagues. Fights, personal attacks, and medical emergencies are all instances where a panic button would cut down response time.

Man down alarms are literally life savers and can protect teachers or other school employees such as cleaners or maintenance staff working out of normal school or term time. . , Man-Down alarms can be activated using an app on a smartphone if a person becomes unconscious, such as during an attack or from an accident.

Professionals visiting pupils at home can use a Timed Personal Alert via an app on their smartphones. Activated via the TPA smart app or a simple text message, once the designated appointment time has been exceeded, an alarm will be raised.