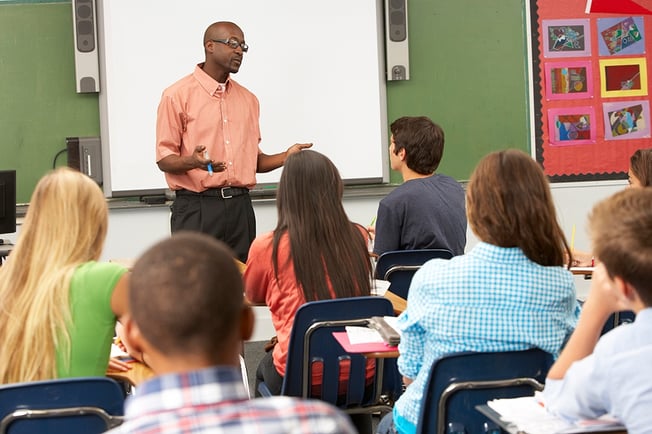 There's no doubt that we've all become more sensitised to violence, and it's near impossible to keep it from the eyes and ears of impressionable young minds. Games, music, films, and even cartoons contain some level of aggression. Despite parental controls on various devices, watersheds helping keep bloodshed from mainstream TV, and despite the multiple efforts of governments, schools, teachers, parents and charities like the NSPCC, antisocial behaviour and violence in schools is still on the increase.

The heart-breaking murder of school teacher Ann Maguire, who was savagely stabbed to death at her school in 2014, has made the headlines again following Mrs Maguire's family losing their legal challenge against the coroner to call pupils to give evidence in the coming inquest. Will Cornick carried out the murder because he didn't like Spanish. He bragged about his plans to carry out the execution to his peers, both in person and on social media. He took a bag of knives to school in preparation for the attack. Unfortunately, in line with Mr Justice Holroyde's decision, no amount of physical witness statements can bring Ann Maguire back to life. Being one of thousands of students who make tall claims and spurt violent rhetoric across social media platforms, nobody took Cornick seriously. So, the questions many teachers, students and parents will be left with is: at what point do threats of violence escalate, and what measures, if any, can be taken to prevent future incidents?

School safety guidelines and the escalation of antisocial behaviour

With police now investigating around 20,000 violent incidents in schools each year, it's clear antisocial behaviour is not something which takes place after dark, away from school grounds. It's on the increase, and the severity of such behaviours are pushing the boundaries into a yet undefined sub-category. Even though in some schools the use of physical restraint is now allowed to be practised, there are plenty of examples of how futile such efforts would probably be.

Mrs Maguire never stood a chance against the stocky 15-year-old Cornick and his arsenal of knives. A seven-year-old girl in Scotland who repeatedly lashed out at teachers in feral attacks, biting, kicking and brandishing weapons she made herself, would no doubt have challenged attempts at restraint (if any teacher in their right mind tried); and the teacher who feared for his life after a student ran at him with an axe had little desire to man-handle his attacker. These are all newsworthy stories, but many stories don't make the news. However, knowing that 9 out of 10 teachers suffer some level of abuse while in the classroom surely serves as evidence that things are getting worse.

Over the past few years, various changes have been implemented to address the new violent landscape many schools have found themselves facing. The causes behind antisocial behaviour are many and wide and include issues such as the family unit; domestic violence, substance misuse, cultural influences, etc. As bullying, including cyber-bullying, is also on the rise, pupils responsible for this type of behaviour could also be identified as a potential risk to teachers. To assist the new inspection process, parent responses from online surveys like the Parent View address how children feel at school: if they feel safe, well-looked after, and if they are generally happy. But there are no solid statistics on bullying, probably because most children feel powerless and scared to report abuse - their abusers left unidentified and free to carry out more abuse to other pupils and, if left unchecked, possibly violent acts towards adults too.

The NSPCC's role on safeguarding and protecting pupils

Although there are school safety guidelines and policies in place to deal with issues such as bullying and antisocial behaviour, and government legislation keeps being revised to help control violent pupils, the NSPCC also provides support, training and resources to help teachers spot signs of abuse, or recognise those displaying inappropriate behaviour. Although the NSPCC's support is designed to protect children, it can also help protect teachers from attacks by identifying problem students, hopefully intervening before things escalate from displays of antisocial behaviour, into acts of physical violence.

The GMB has carried out one of the most extensive surveys into the increase in classroom violence against teachers. The results highlight many areas of concern for teacher safety today, but one statistic in particular is that over half of those asked said physical abuse from pupils has increased over the past two years and this includes being kicked, punched or having objects like chairs thrown at them, plus verbal threats to their life.

Every school, college and university has its own tailored policies and guidelines based on information, rules and suggestions from official bodies such as Ofsted, charities like the NSPCC, unions like the GMB, and feedback from parents, teachers and pupils. How any establishment deals with anti-social behaviour will be specific to their needs, and may or may not be sufficient in dealing with impressionable, hormone-ravaged youngsters who are influenced by the adult-made violence they're exposed to on-screen, at home, amongst their peers, in their community or all of these things.

In many ways, it comes down to individuals; how people working in education can help prevent themselves being another statistic in a report, or being the topic of the latest news story. Preventions range from controversial ideas like body cameras for teachers to record student outbursts to less intrusive but more intelligent technologies like smartphone apps, including potential lifesaving SOS and man down alarms.