The time of death

Klaus Allison, Managing Director of ANT Telecom, explains why businesses looking to safeguard lone workers should focus less on alarms and audit trails, and more on the processes and procedures to ensure workers get the timely help they need when faced with an SOS. Protecting the lone workforce is not about ticking a box – it’s about preventing your employees being carried out in one.

At 2.16pm, Harry suffered a cardiac arrest whilst working alone at a wind farm in a remote part of Western Scotland. The tilt and motion sensors on his lone worker device detected that he was unconscious and automatically alerted an Alarm Receiving Centre (ARC) in Northern England. They set about escalating a response. At 4.45pm, after a series of unsuccessful attempts to contact nearby co-workers for help, one of Harry’s colleagues finally came to his assistance. The time of death was recorded as 3.47pm. Harry’s story is both hypothetical and extreme. But as the UK’s lone worker population climbs towards seven million, the scenario is much more than a work of fiction. It’s an accident waiting to happen. The inherent dangers of working alone mean that an employee SOS is a perennial possibility. What’s more, the risks are not just confined to those working in harsh or hazardous environments; lone worker roles occupy diverse settings from utilities, manufacturing, distilleries and chemical plants, to construction sites, consumer maintenance and healthcare and social workers. It’s a broad church, but employers must do more than pray that their workers are safe.

UK employers are fully aware of their responsibilities to protect the health and safety of all lone workers. Whilst there is currently no specific legislation that relates to lone working, the 2007 introduction of the Corporate Manslaughter Act has cranked the regulatory temperature up a notch and focused management attention beyond the basic duty of care. For business owners, the maximum penalty for an avoidable fatality is imprisonment, whilst fines of up to 10% of turnover are equally impactful. Moreover, the human and reputational implications are incalculable. So what are companies doing to ensure their lone workers don’t meet the same fate as hypothetical Harry?

Many companies have strengthened lone worker security with the deployment of an ARC. And why not? ARCs are regarded as an effective means of activating an emergency response and, in tandem with intuitive lone worker devices, can mobilise appropriate support when an incident has taken place. Furthermore, their use can demonstrate an employer’s commitment to lone worker safety and provide a robust audit trail of activity to help prove regulatory compliance. It certainly ticks a box. But is it enough? And should lone worker safety be a tick-box exercise to satisfy the regulators? These are rhetorical questions.

ARCs are undoubtedly effective when a lone employee is under the threat of abuse or attack from another person – operators can listen in to determine the emergency response and take appropriate action following clear and accredited processes. However, in the event of a serious accident or injury, the approach can have major limitations.

When lone workers are unable to respond, ARC operators are hamstrung. Without sufficient detail, they cannot alert emergency services and must instead follow a pre-defined process of telephoning nominated individuals in a list-wise fashion. If the first person on the list fails to answer, they move directly to number two – and so on until someone responds. This can prove a lengthy process, but in a time-critical situation, every second counts. The most likely response will often come from office-based workers who are themselves some distance from the incident – further compromising the ability to expedite escalation. In fact geographical location can often be another limiting factor in the approach. There are frequent examples of lone workers expressing anxiety that their safety is in the hands of a call centre some two hundred miles away. It’s a salient point that goes to the heart of the challenge: when seeking to protect lone workers, the key thing to focus on is not the alarm – it’s ‘the help’. Fundamentally, how can you get help quickly and effectively to a lone worker in jeopardy? 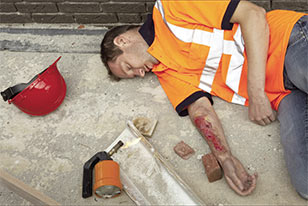 The most logical assistance in an emergency situation will come from individuals in the near vicinity – particularly fellow lone workers who are familiar with the terrain, the circumstances or the challenges of their profession. It’s a simple notion: colleagues who are commonly exposed to the same risks and have a real-world understanding of the potential pitfalls will have a high motivation to run to help a co-worker. The trick is to alert them.

With a wide range of lone worker devices available in the market, designing an effective rapid response process that alerts and mobilises nearby workers is relatively straightforward. But implementation depends on companies rethinking their processes and procedures and leveraging technologies that reflect the specific challenges of their lone workers’ environments. To progress, health and safety executives should consider reviewing their current means of protecting lone workers – and take an holistic and inclusive approach to developing a more robust system. The most effective strategies have emerged where operations managers and health and safety execs have engaged in open dialogue with lone workers to understand their real-world requirements, and designed systems that align with their needs. What are the everyday challenges? Where are the risks, and how safe would managers feel if they were faced with similar risks supported by their existing communications systems? These are human considerations and they require similarly human engagement to arrive at the right solution.

Furthermore, best practice commonly relies on the involvement of a trusted telecoms partner that can help companies identify options, define processes and implement solutions. The best partners will have expertise in the design of lone worker strategies, an understanding of environmental risks and knowledge of the evolving marketplace for lone worker solutions. Moreover, they will provide independent advice to help organisations design agile communications approaches that respond to the changing lone worker landscape.

As the lone worker population continues to grow and the regulatory scrutiny of corporate health and safety measures increases, companies must renew their efforts to ensure lone workers are adequately protected. Through independent advice and thorough environmental analysis, organisations can best develop a customised approach that is fit for purpose.

Certainly, a sole reliance on ARCs could leave organisations and individuals exposed to unnecessary risk. The approach can indeed provide auditable information that documents activity and proves to the regulators that a company ‘cares’ about its lone workers. It certainly ticks a box. But does it truly protect the workforce? At the worst extreme, systems that fail to escalate a timely response do little more than record the time of death. What’s best: ticking a box, or preventing your employees from being carried out in one?

Protecting lone workers is a serious consideration with major human implications. Companies must take the time to think the process through. Fundamentally, it’s only by focusing on ‘the help’ rather than ‘the alarm’ that businesses can implement systems that genuinely safeguard isolated workers, wherever they are. And with lone workers currently totalling 22% of the UK employment market, it’s not just about protecting remote workers in harsh environments – it relates to every Tom, Dick and hypothetical Harry.